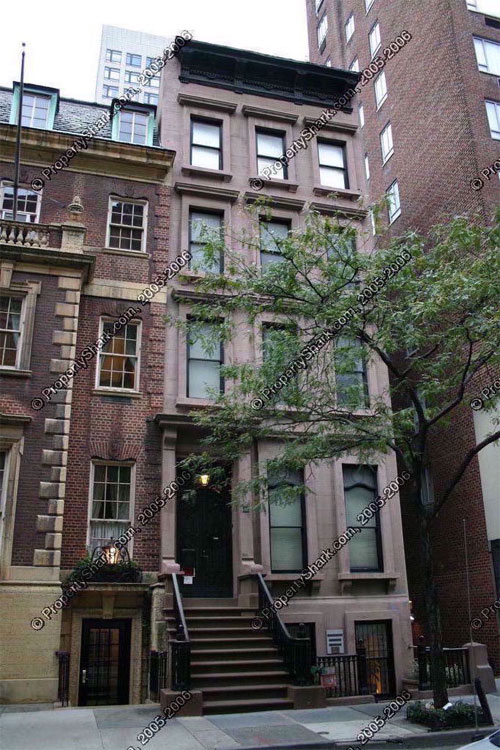 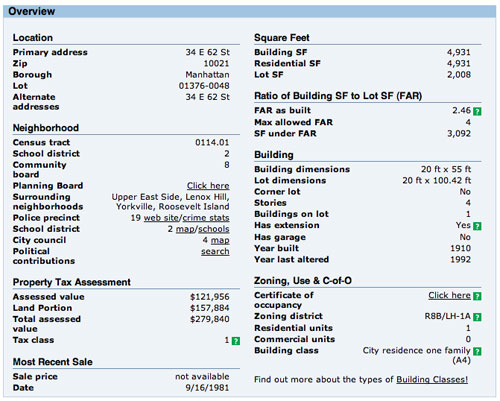 [34 East 62nd Street was recently destroyed in a gas explosion, reportedly set off by the owner to spite his wife.]

As far back as 1927, [Vincent] Astor and a circle of friends had rented a nondescript apartment at 34 East Sixty-second Street in New York where they set up a mail drop and installed an unlisted telephone. The group met monthly in secret and traded gossip and informal intelligence. They had a name for their tight little society, The Room. Astor's fellow members included Theodore Roosevelt's son Kermit [later with the CIA directed overthrow of Iran in 1953]; Winthrop W. Aldrich, banker; David K. E. Bruce, sometime diplomat; Nelson Doubleday, publisher; William Rhinelander Stewart, philanthropist; Marshall Field, journalist; and fewer than a dozen other eminences.

Astor, a man with a large, square, roughly handsome head, his resemblance to an aging pug relieved only by his upper-class speech, presided over The Room. On returning from their frequent globe-trotting, over dinner, members reported the world leaders they had met with and what they had learned that was not to be found in newspapers. Distinguished figures were invited to speak to them, the polar explorer Commander Richard E. Byrd on one occasion, Somerset Maugham on another, not so much for his prominence as a novelist and playwright, but because Maugham had been a secret agent in World War I, a role for which The Room members felt a keen affinity. With their love of secrecy, shared confidences, and clandestine trappings, The Room might easily be dismissed as dilettante amateurs, grown men enjoying boys' games of secret codes and invisible inks. To an extent this impression was accurate. Yet, their elevated professional and social positions did place valuable intelligence at their fingertips.

With the inauguration of FDR as president on March 4, 1933, The Room now had a friend at the top and an eager consumer for its insider information. While Roosevelt was never formally a member of The Room, he knew them all through the Groton, Harvard, society, and professional fraternity. They were his people. For as much as FDR, in his public life, associated with the crusty, the earthy, the humbly born -- political cronies like a Louis Howe, a Jim Farley, or an Ed Flynn -- when the moment was purely social, he chose to spend it with his fellow patricians.

The outbreak of hostilities brought Vincent Astor and The Room more closely into FDR's orbit. Astor's Pacific mission may have been a letdown, and The Room, whose members had now reconstituted themselves as The Club, still behaved somewhat as adventure-seeking dilettantes. Despite the sophomoric antics, however, their powerful positions in the American establishment continued to offer ideal listening posts. In the fall of 1939, Astor wrote FDR, "Tomorrow I am starting to work on the banks, using the Chase as a guinea pig. . . . Espionage and sabotage need money, and that has to pass through banks at one stage or another." Club member Winthrop Aldrich, who directed the Chase National, New York's leading bank, proved Astor's point. He informed Roosevelt that Amtorg, the Soviet Union's trading corporation in America, was spending over $2 million a week, much of it in its role as an espionage tront.

Astor himself was a director of the Western Union Cable Company. Snooping into international cables was a federal crime, but Astor happily ran the risk. He was able to apprise FDR of intercepted telegrams revealing foreign agents operating out of Mexico and spying on the United States. Cables to and trom Spanish embassies in the Americas exposed Spain's increasing ties to Nazi Germany. FDR further learned that a Brazilian naval mission buying arms in America was a gang of grafters.

The President actively promoted this eavesdropping. On October 20, 1939, Astor reported that he had arranged to listen in on foreign radio transmissions, "in accordance with your wishes. . . ." While the activities of The Club provided peripheral excitement, what Astor hankered for was to become FDR's chief of a future American intelligence service. With Europe at war, and given Astor's connections in Britain, especially through the English branch of his family, the opportunity might well be on the horizon. Undeniably, an intelligence vacuum had to be filled. Even before the war, FDR had expressed his exasperation to his secretary of state, Cordell Hull. The Federal Bureau of Investigation, the Army's Military Intelligence Division, and the Office of Naval Intelligence were "constantly crossing each other's tracks," he complained to Hull. This duplication was wasteful, expensive, and inefficient, the President charged. He wanted the activities of the three agencies sensibly coordinated.

This sudden passion for administrative efficiency must have come as a shock to Hull, for a hallmark of the Roosevelt administration was bureaucratic anarchy. FDR disdained organization charts, created competing offices without warning those rmming the old offices, and blithely broke the chain of command to deal with whomever he pleased. Responsibilities he assigned were vague and the authority to fulfill them murky. As an observer put it, the President handed one job to several men and several jobs to one man. Textbook administrative concepts such as a manageable "span of control" meant nothing to Roosevelt. At one point, nearly one hundred associates could bypass his secretaries and phone the President directly.

Few, however, abused this privilege more than once. The shrewder of his associates did not see FDR's style as the mark of a poor administrator, but as a deliberate device for keeping everyone else off balance while he alone maintained control. In a rare burst of poetic imagery, Secretary of War Henry Stimson once observed, "His mind does not easily follow a consecutive chain of thought but he is full of stories and incidents and hops about in his discussions from suggestion to suggestion and it is very much like chasing a vagrant beam of moonshine around a vacant room." By forcing people who often held contrary views to work together, FDR ran the short-term risk of causing conflict, confusion, and injured feelings. But over the long term his dispersal of authority acted as a brake against the commission of major blunders. If FDR's leadership was chaotic, it was inspired chaos.

Nevertheless, the President was genuinely displeased with the disjointed, overlapping, shotgun conduct of intelligence. On June 26, 1939, two months before the war erupted in Europe, he had ordered the heads of the FBI, MID, and ONI to start synchronizing their actions. He handed responsibility for this thankless task to the assistant secretary of state for administration, George S. Messersmith. Roosevelt, at this stage, had no thought of creating a central intelligence service. He was not yet ready, nor was the country. As The New York Times editorialized: "No secret police is needed or wanted here." He simply needed someone to knock heads together. Messersmith was wise enough to recognize the rivalries and jealousies among federal fiefdoms, particularly endemic among those trafficking in secrets. He thus sought to put a civilized tone on his first attempt to bring together the competing agencies by inviting their chiefs to his Georgetown home for dinner. Afterward, over port and cigars, they could figure out a way to stop stepping on each other's toes. The dinner was hardly a success. The figure then with the major counterespionage role was FBI director J. Edgar Hoover, and Hoover did not deign to show up at Georgetown. He attended Messersmith's next meeting only when ordered directly to do so by the President.

A gas explosion destroyed a four-story town house on the Upper East Side on Monday morning, and law enforcement officials said they were investigating whether the thunderous blast was a bizarre last chapter in a divorce battle over who would end up owning the building.

Chunks of flying plaster and shards of glass injured four people walking along the street outside as the house collapsed in a cloud of dust and smoke that hung over the skyline. Ten firefighters were also hurt, as was the husband in the divorce case, identified by the police as Dr. Nicholas Bartha, a 66-year-old internist who lived in the building and had his office there.

“We just heard a boom, and everything shook, and we ran,” said William Montanez, a doorman at the apartment house next door. “It was chaos.”

The blast turned East 62nd Street, between Madison and Park Avenues, from a well-heeled oasis into an urban inferno, with television-news helicopters zooming in from above. Until the explosion jolted doormen and blew out windows, the street was a tree-lined block with a private club, a private school and the kind of storied history that included serving as a longtime meeting place for a secretive group of President Franklin D. Roosevelt’s confidants

BREAKING: 34 East 62nd Before the Fall

Persico also describes Astor's and The Room's relationship with MI6, in particular with William Stephenson who headed the SIS office in New York City and cultivated the amateurs to gain America's entrance into WW II. And Persico recounts how the head of British intelligence put on a false spy-adventure show to dazzle Roosevelt himself during WW I. Fixing intelligence, indeed.

The book provides an impressive number of parallels to the current machinations of Bush and Blair and manipulations of them by their spies and vice versa use of personally-manipulable spies to advance their political agendas. It is not likely the Democrats will want to look closely at the wartime excesses of one of their pre-eminent heroes, nor will the Republicans want to examine similar deceptions by Abraham Lincoln. Or any other ruler who has used unbridled war powers to insure political supremacy.

Media reports confirm 34 East 62nd Street as the address of the building that collapsed into rubble earlier this morning on the Upper East Side. Above, via PropertyShark, a pre-collapse look at the building. After the jump, the PropertyShark report on the building, which was built in 1910 and last traded hands in 1981.

Latest word: Prior to the collapse, Con Ed was investigating reports of a gas odor at 36 East 62nd (that building has apparently suffered damage in the rear). The explosion—which is unofficially being attributed to a gas leak—seems to have happened in the basement. Five civilians injured, one critically; three firefighters injured too, none seriously.

New latest word: ABC News is reporting that 34 East 62nd Street was to be put on the market at the end of the month, as part of a divorce settlement among the building's owners. Also, there may be a connection between the building collapse and an earlier call from someone inside the building threatening to commit suicide.